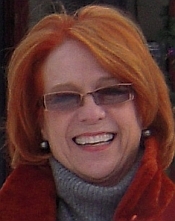 Cherry Wilkinson was born on 30 March 1951 in Cape Town, South Africa. In her early 20's, she moved halfway across the globe from South Africa to the United States. She settled in beautiful San Francisco, where she started what eventually became a thriving interior design business, before deciding to channel her creativity into writing full time. When asked why she chose to write romance, she says, "There simply aren't enough happy endings in the world and I wanted to create a few more for people to enjoy." When not glued to her computer or reading, the former RITA finalist can be found puttering around her flower garden performing snailacide. Popular on the workshop circuit, she gives lively classes on writing and the writing life. Pulling no punches when asked how to become a published writer.

Cherry currently lives in western Washington and collects teapots and books. Lots of books. With their two grown daughters out of the nest, she and husband David have lived under the dominance of their feline T.C. (Temporary Cat), for 10 years, and have recently acquired a perfect black schnauzer puppy, Max. Their dream house finally complete, she loves to spend time at home. A corner desk keeps her focused on writing, but the windows behind her, with a panoramic view of the front gardens, are always calling her to come outside and play.