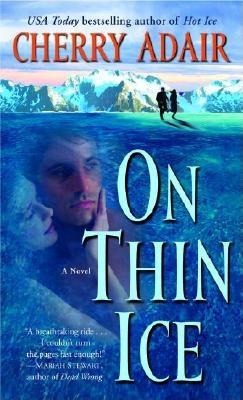 While enduring a failing marriage and the loss of her husband to a terminal illness, Lily Munroe found release in her passion for the exhilarating Iditarod race across Alaska. Now single again, she's more determined than ever to win the competition, awaken her sense of self, and leave her past behind.

The person to beat is two-time winner Derek Wright, a man Lily dubs Mr. Wrong. Derek is extremely sexy and devilishly charming, and Lily can't deny her intense attraction. Little does she know that Derek is an elite antiterrorism agent whose skills she'll need to stay alive. For once the race begins, Lily meets with a series of suspicious accidents. Derek vows to keep her safe--no matter how hard she tries to shake him and take the lead. As the spirited contest turns into a race for survival, Lily and Derek must battle their growing attraction . . . and a ruthless assassin with a directive to kill.
Reviews from Goodreads.com

Ah, Derek Wright. Only a true Cherry Adair fan can understand how a character can be so real to you that they will argue with other fans on about who he “belongs” to. When you read On Thin Ice you can see why Derek is one of these characters and why Lily Munroe is his perfect match. As they compete in the famous Iditarod race, Derek and Lily are soon fighting something more dangerous than the frozen Alaska wild. You definitely won’t want to miss this great read!