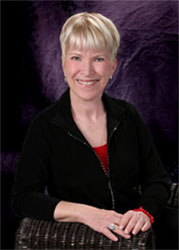 Bestselling author Vicki Lewis Thompson has written over seventy romance novels. After earning her Bachelors and Masters Degrees in English, Thompson has been both a journalist and high school teacher. It was her husband who encouraged her to write a romance. She sold her first book in 1984 to the Harlequin Temptation line. Her steamy writing led her to be one of the launch authors for the Harlequin Blaze and Harlequin duets lines. She is also the author of “Nerd in Shining Armor” which was a 2003 Reading with Ripa selection. She lives in Arizona with her husband where they share the hobbies of travel and laughter.

A Babes On Brooms Novel


Three Cowboys and a Baby


A Wild About You Novel


It Happened One Night