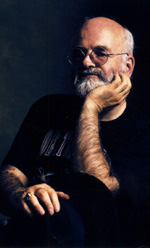 Terry Pratchett was born in 1948 in Beaconsfield, Buckinghamshire. He had his first story published when he was just thirteen, and after leaving school at seventeen to become a journalist he continued writing, publishing his first novel, The Carpet People, in 1971 and going on to produce the phenomenally successful Discworld series as well as numerous other books, winning many awards and becoming the UK’s bestselling author.

He died in March 2015 after a long struggle with Alzheimer’s disease.