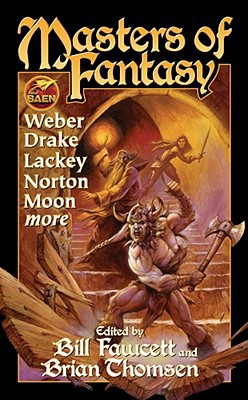 "Masters of Fantasy" has a star-studded cast of popular fantasy writers, with brand new adventures set in their most popular series. David Weber, author of the New York Times best-selling "Honor Harrington" series, is equally a master of fantasy in his popular "Bahzell" series, including the best selling "Wind Rider's Oath". Mercedes Lackey is among the most popular of today's fantasy writers and her "Valdemar" novels are best sellers. Mickey Zucker Reichert is author of the best-selling "Bifrost Guardians" and "Books of Barakhai" series. David Drake is known for his best-selling "Hammer's Slammers" series and the equally popular "Lord of the Isles" fantasy series (Tor). Andre Norton's Witch World novels have enthralled readers for four decades. Elizabeth Moon's "Paksenarrion" series are among Baen's top-selling titles. Alan Dean Foster is known for his top-selling space adventures, his movie novelisations, and his fantasy adventure novels. Also on board are Hugo and Nebula winner Michael Resnick, New York Times best-selling author Robert Asprin, and more. This feast of fantasy adventure will be a must-buy for all fantasy fans.
Reviews from Goodreads.com