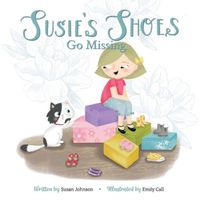 One night, Susan Johnson tossed aside the book she was reading with disgust. She commented on the poorly crafted novel to her husband, who flippantly suggested that she write one of her own. She took him up on his challenge. The former art historian spends a great deal of time researching her books. She draws upon her ability to use her imagination to creative lively characters and bestselling books. Born in 1939 in northern Minnesota in a small town, Johnson had plenty of opportunity to use her imagination to entertain herself. Today, she lives in the boondocks near North Branch, Minnesota.