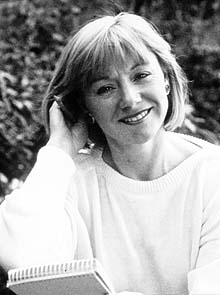 Penelope "Penny" Jones was born on 24 November 1946 in Preston, Lancashire, England. She left grammar school in Rochdale with O-Levels in English Language, English Literature and Geography. She spent fourteen years working as a shorthand typist in Manchester. She began her writing career in 1979 as Caroline Courtney, writing regency romances. She also used the nom de plume of Melinda Wright for three air-hostess romps and Lydia Hitchcock, for two thrillers. Since 1981, she signs contemporary romances as Penny Jordan, and since 2003, she signs historical novels as Annie Groves, her mother's maiden-name.

Penny was one of the most prolific writers with more than 200 novels and 70 million copies of her books translated into many languages. Widow of Steve Halsall, an accountant, she lived in Nantwich, Cheshire with her dog, Sheba, and her cat, Posh. Sadly, she died of cancer on December 31, 2011 at a hospital in Cheshire.