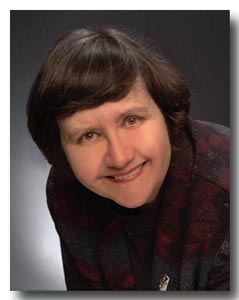 Anne McAllister was born in California, spent formative summer vacations on the beach near her home and on her grandparents' small ranch in Colorado and visiting relatives in Montana. Studying the cowboys, the surfers and the beach volleyball players, she spent long hours developing her concept of "the perfect hero." One thing she did do, early on, was develop a weakness for lean, dark-haired, handsome lone-wolf type guys. When she finally found one, he was in the university library where she was working at the time. It didn't matter. She knew a good man when she saw one. And they've now been sharing "happily ever afters" since then. She says: "Once I had a book with a cover I really loved. And my husband found out who the artist was and bought me the illustration for my birthday. It was entirely unexpected and I was thrilled".

Before she started writing romances, Anne taught Spanish, capped deodorant bottles copyedited textbooks, got a master's degree in theology, and ghostwrote sermons. It all became grist for the fictional mill - as has the family history she likes to learn more about every chance she gets. She might have to try her hand at that historical, after all - especially now that she's learned more about that second great-grandfather who claims to have shot 40 men!

Anne and her husband have four children, four dogs, and one bionic cat who, contrary to all expectations, is working on his second millennium. Quite a few years ago they moved to the Midwest, but they spend more and more time in Montana. And as Anne says, she lives there in her head most of the time anyway. She wishes a small town like her very own Elmer, Montana, existed. She'd move there in a minute.


Code of the West

From Here to Paternity


Goin' to the Chapel


In Bed With the Boss


Men of the Year


Return of the Rebels

The Night That Changed Everything (Nov-2011)