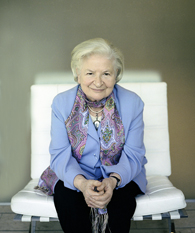 P.D. James has written twenty novels, many of which have been turned into popular television specials in the U.S. and other countries. Before she began writing, James spent 30 years working in various departments of the British Civil Service including the Police and Criminal Law department. She also served as a magistrate and director of the BBC.

James has won many awards for her writing including the Grand Master Award from the Mystery Writers of America, induction into the International Crime Writing Hall of Fame, and was created Baroness James of Holland Park. In 2000, she turned 80 and wrote her autobiography, Time to Be in Earnest. Her favorite film is The Third Man. James currently resides in London and Oxford.