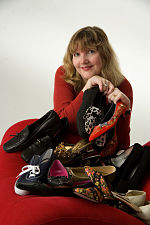 Maryjanice Davidson is the author of the popular “Undead” series of paranormal romances. She is an Air Force brat who was raised in several states over several years. She is New York Times and USA Today bestseller. She is also the co-writer with her husband, Anthony Alongi, of the “Jennifer Scales” series of books about a young weredragon. These books were originally published as young adult novels but are re-published as fantasy novels. Davidson won the 2004 Romantic Times Reviewer’s Choice Award.
Maryjanice Davidson lives in Minnesota with her husband and two children. When she’s not hunting down the nearest Cinnabon franchise, she writes and speaks at writer/reader conferences around the world.