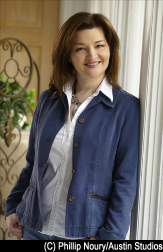 A Michigan native and descendant of Mayflower passenger Governor William Bradford, Tina St. John makes her home in coastal New England with her husband, the inspiration for all her heroes and her most devoted fan. The couple are the caretakers of two rescued felines who have trained them to surrender treats, tuna, and belly rubs on command.

She quit a full-time corporate job to pursue her dream of becoming a published author. In 1995, Tina St. John sold her first completed manuscript, Lord of Vengeance, and has since gone on to pen several more acclaimed medieval romances. She was frightened of vampires as a child. Luckily, she has overcome this fear and uses that early fascination to drive her paranormal romance novels as Lara Adrian. Her stories mesh fear, sensuality, and power into vampire romance fantasy novels and today she is well-known for the popular Midnight Breed series. She believes that “vampires as heroes in romantic fiction…are the ultimate bad boy.” Her books have been licensed in over sixteen countries. She is also a RWA RITA finalist and Romantic Times Reviewers' Choice award recipient.