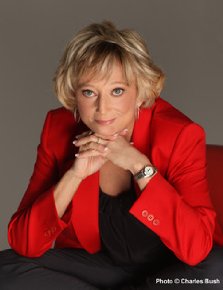 Jean Catherine Coulter was born on 26 December 1942 in Cameron County, Texas, USA, where she grew up in a horse ranch. She graduated from the University of Texas and earned a degree at Boston College in early 19th-century European History.

Catherine married Anton Pogany, a medical student, and she took a job as a speech writer for a Wall Street company president. She spent many of her evenings alone, reading romance novels. One night when they were home together, she found herself in the middle of a particularly bad book and threw it across room, asserting that even she could do better. Her husband challenged her to prove herself, and the two spent the weekend plotting out a storyline for a gothic romance. Catherine wrote the novel in the evenings, and when she finish it, she sent it to an editor at Signet. Her novel "The Autumn Countess" was published in 1978. She says that chose a Regency romance for her debut because: "as any published author will tell you, it's best to limit the unknowns in a first book, and not only had I grown up reading Georgette Heyer, but I earned my M.A. degree in 19th century European History.". She became a bestseller novelist, and she earned her reputation writing historical romances, but now also writes contemporary romances. Catherine lives in Marin County, California with her husband, Anton Pogany, now a physician.