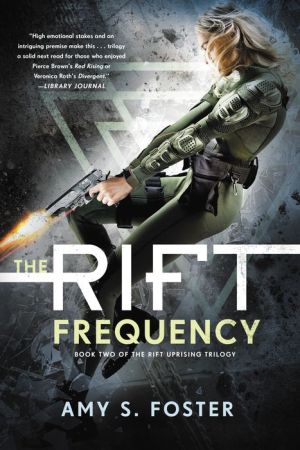 Share:
To save her love and unlock the mystery of who she is, a brave young woman must travel between alternate realities in The Rift Frequency, the exciting second book in Amy S. Foster's The Rift Uprising Trilogy.

For three years Ryn was stationed at The Battle Ground Rift site--one of the fourteen mysterious and unpredictable tears in the fabric of the universe that serve as doorways to alternate Earths--and then she met Ezra Massad.

Falling in love and becoming a rebel Citadel wasn't part of Ryn's life plan, but with Ezra there asking all the right questions, they began to decode what's really going on with the Allied Rift Coalition, and what they discovered was enough to start a civil war.

When the base explodes with infighting and Ezra gets caught in the fray, he is accidentally pushed through the Rift, taking a stolen laptop--and the answers it could give Ryn--with him.

Now all Ryn wants is to locate Ezra and get back to her Earth. But that's not easy when she's traveling the multiverse with Levi, the painfully guarded Citadel who shoved Ezra through in the first place. And Ryn is quickly learning that inside the multiverse there is no normal--it's adapt, or die--and the one weapon she really needs to win the war back home is the truth.