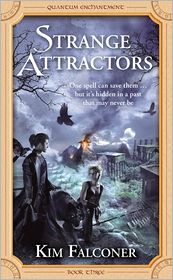 Share:
A stunning end to a powerful trilogy where the universe provides many surprises ... in the past, present and future. Set in worlds both technological and fey, scientific and magical, StRANGE AttRACtORS brings to the events begun in tHE SPELL OF ROSEttE to a dramatic and gripping end. Corsanon's warriors are a vanished race, defeated in the temple wars long ago ... or so Rosette thought. She changes her mind when the portal drops her in the middle of an armed legion. Before she and Drayco can escape, teg is injured and the Sword Master imprisoned. the glamour she spins to rescue her father sets in motion a series of events that may sunder Earth and Gaela forever. Unknown to all, the corridors hide their greatest threat, weaving magic so tight that even Kreshkali can't see it. A battle ensues and the fabric of the many-worlds starts to unravel. Only one of the Richter blood can put things right, but which descendant will use the spell?