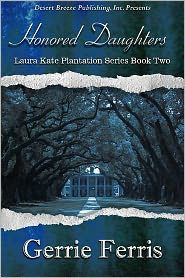 Share:
While Jack Rhodes is in London, Laura Kate O'Connell is tussling with a life-changing decision. Jack has asked her to marry him. Love him as she does, marriage and babies has never been in her life plan.

A law enforcement agent asks Laura Kate to find out who killed his niece, one of several students at Honored Daughters who have died mysteriously. Jack can¿t know she's involved, or he'd be on the next plane home. To complicate the situation, a former soldier-turned-militia-organizer, Pearse Macaula, falls for and stalks her. He's dangerous, but did he murder the Honored Daughters girls? She must trust him to find out, while brushing off his advances. This is a man who always gets his way. Will he try to kill her if he can't have her? It's a chance she has to take.