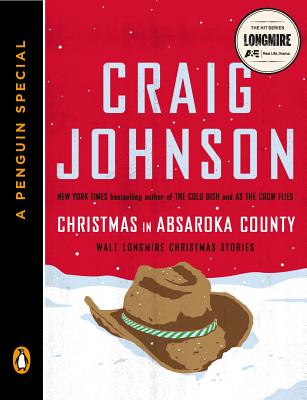 Full of Longmire's dry wit and good heart, "Christmas in Absaroka County" is a holiday must-have for every Longmire and Craig Johnson fan, and it also includes the first chapter of "The Cold Dish," the first novel in the Walt Longmire Mystery Series.

Readers glimpse a softer side of Sheriff Walt Longmire as he grapples with the death of his wife, Martha, and his sometimes turbulent but ever-loving relationship with his daughter, Cady. In these four stories -- “Ministerial Aid,” “Slick-Tongued Devil,” “Toys for Tots,” and “Unbalanced” (three of which have been sent to Johnson's fans over the years in the author's “Post-it” e-mails) -- Walt is alternately at his best and his worst. He helps a somewhat delusional elderly victim of domestic abuse while sporting a bathrobe and a mean hangover on New Year's Day. He's sidelined by grief when his wife's obituary reappears in the paper and there's an unexpected knock on his door two days before Christmas. He strives to help even those who don't want it when he picks up a young female hitchhiker, and he's forced into some last-minute Christmas shopping by the Greatest Legal Mind of Our Time, during which he might just end up saving a young Navy chaplain's Christmas.