As the Crow Flies — Craig Johnson 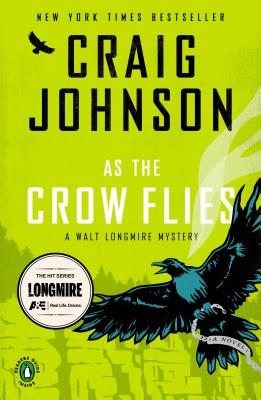 Embarking on his eighth adventure, Wyoming Sheriff Walt Longmire has a more important matter on his mind than cowboys and criminals. His daughter, Cady, is getting married to the brother of his undersheriff, Victoria Moretti. Walt and old friend Henry Standing Bear are the de facto wedding planners and fear Cady's wrath when the wedding locale arrangements go up in smoke two weeks before the big event.

The pair set out to find a new site for the nuptials on the Cheyenne Reservation, but their scouting expedition ends in horror as they witness a young Crow woman plummeting from Painted Warrior's majestic cliffs. It's not Walt's turf, but the newly appointed tribal police chief and Iraqi war veteran, the beautiful Lolo Long, shanghais him into helping with the investigation. Walt is stretched thin as he mentors Lolo, attempts to catch the bad guys, and performs the role of father of the bride.

With the popularity of Craig Johnson's Walt Longmire series growing apace, fans new and old will relish As the Crow Flies, the sheriff's latest quirky and complex investigation.