Of Blood and Bone — Nora Roberts 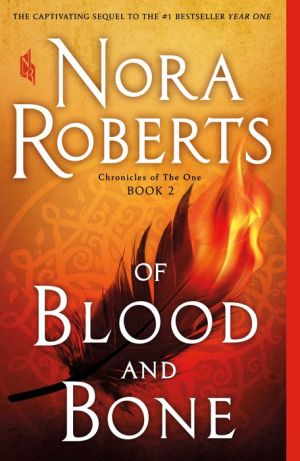 Nora Roberts, the #1 New York Times bestselling author of the epic YEAR ONE returns with OF BLOOD AND BONE, a new tale of terror and magic in a brand new world.

They look like an everyday family living an ordinary life. But beyond the edges of this peaceful farm, unimaginable forces of light and dark have been unleashed.

Fallon Swift, approaching her thirteenth birthday, barely knows the world that existed before―the city where her parents lived, now in ruins and reclaimed by nature since the Doom sickened and killed billions. Traveling anywhere is a danger, as vicious gangs of Raiders and fanatics called Purity Warriors search for their next victim. Those like Fallon, in possession of gifts, are hunted―and the time is coming when her true nature, her identity as The One, can no longer be hidden.

In a mysterious shelter in the forest, her training is about to begin under the guidance of Mallick, whose skills have been honed over centuries. She will learn the old ways of healing; study and spar; encounter faeries and elves and shifters; and find powers within herself she never imagined. And when the time is right, she will take up the sword, and fight. For until she grows into the woman she was born to be, the world outside will never be whole again.
Reviews from Goodreads.com

Of Blood and Bone is the second book in the Chronicles of the One trilogy by popular American author, Nora Roberts. It follows on from Year One and there is virtually no recap, so readers are advised to start there. Lana Bingham knew from the moment her daughter was born that Fallon would have to make a choice at the age of thirteen. She had been raised as Simon Swift’s daughter, but the family knew that Max Fallon’s daughter was destined to be The One. And now, Year Fourteen after the Doom, Mallick is back to take Fallon away for training, if that is what she chooses.

In New Hope, life is settling down, with growing and making and caring all part of the mix, but also regular supply scavenging trips and raids on Purity Warrior strongholds to free prisoners and slaves. Their small community commonly takes in newcomers, and since the July massacre that killed Max and forced Lana to leave, security is taken seriously. So too, Arlys and Chuck consider their role in communicating the news, honest and true, as widely as possible via New Hope Broadcasting. But any complacency about their achievements will disappear when Fallon Swift makes known her plan.

Roberts has a real talent for creating characters that the reader is willing to invest in and care about, and it’s easy to credit Stephen King’s quote on the rear cover “I love Nora Roberts”: she effortlessly equals his power in storytelling. The characters and their interactions are at least as important as the plot, which certainly does have elements of predictability, but there’s also quite a shock at the end to make it really interesting. Book Three, The Rise of Magicks will be eagerly anticipated. Recommended!