As the Pig Turns — M.C. Beaton 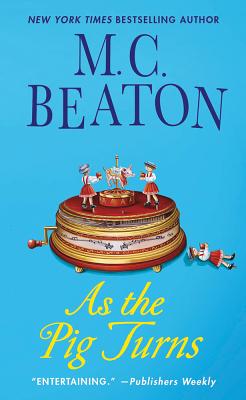 Winter Parva is a "picturesque" (touristy) Cotswold village with gift shops, a medieval market hall, and thatched cottages. After a disappointing Christmas season, the parish council has decided to hold a special event in January, complete with old-fashioned costumes, morris dancing, and a pig roast on the village green.

Always one for a good roasting, Agatha Raisin organizes an outing to enjoy the merriment. The rotary spit turning over a bed of blazing charcoals is sure to please on this foggy and blistery evening. But as the fog lifts slightly, the sharp-eyed Agatha notices something peculiar about the pig: a tattoo of a heart with an arrow through it and the name Amy.

The "pig," in fact, is Gary Beech, a policeman not exactly beloved by the locals, including Agatha herself. Although Agatha has every intention of leaving matters to the police, everything changes when the Gary's ex-wife, Amy, hires Agatha's detective agency to investigate -- and another murder ensues. With that provocation, how could any sleuth as vain and competitive (and secretly insecure) as Agatha do anything other than solve the case herself?
Reviews from Goodreads.com

I love Agatha Raisin, and am always excited when a new book comes out. This is a good one for sure. In it we have Agatha and her crew investigating a series of really gruesome deaths. It takes them all over the place, including Las Vegas. As they bumble along they uncover a sophisticated theft ring, bent coppers and fledgling meth labs. What fun! And through it all we have the intrepid Agatha. She is a wonderful character that I have come to enjoy through Ms. Beaton's many books. She is still truly the Queen of the Village Cozy genre. And I love being along for the ride.

Not buying another Agatha Raisin book. The first half of this series was really good. Agatha had established a personality that was interesting, and the plots were tight and well-written. After the detective agency was established, the entire series started to disintegrate. Maybe Beaton is burning out on the Raisin series. Or maybe her publishers, with her success, have gotten greedy and demanding. For whatever reason, Beaton needs to stop writing for a while and reassess her ability and interest in portraying her characters in this series. 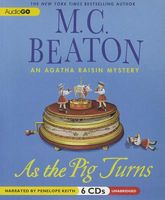 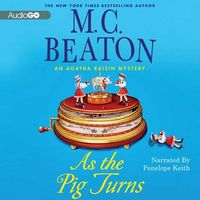