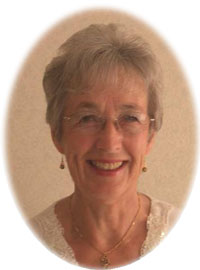 Margaret Mayo was born on 7 February 1936 in Staffordshire, England, and has remained within the country all of her life. She always loved reading, even to the extent of reading comics out loud to her twin brother when she was 8 years old. She left school at 15, and became to work. She married at 22, taking a break to have her two children, Adrian and Tina. Once they were at school she started back to work for the UK manager of a Danish company, and planned her further career by becoming a bilingual secretary. Unfortunately, she couldn't speak any languages other than her native English, so she began evening classes.

In June 1974, she got the idea for a romantic short story—to this day she doesn't know where the idea came from or why, but she thanks her lucky stars because it kick-started her career. Pretty soon, the short story turned into a novel. At this point, she was unsure what step to take next. Margaret, and her mother before her, had always read Mills & Boon romance novels, and to actually be writing one excited her beyond measure. It was never her ambition to become a writer, in fact, her only writing experience was in letters to various pen pals around the world. She has, unfortunately, lost touch with them now and often wonders whether any of them have ever discovered that her chatty letters were the forerunner to her writing career. Luckily for her, the President was a Mills & Boon author who helped to guide her. While her first novel wasn't picked up, the next two she wrote were accepted at the same time, published on 1976, when she was 40. After published 8 books, she began writing full-time, and now she has over 80 to her credit. When she looks at them lined up on her bookshelf she wonders how she has managed to write all those millions of words. She is a hopeless romantic who loves writing. She falls in love with every one of her heroes and likes to boast about how many "love affairs" she's had.