You Never Can Tell — Kathleen Eagle 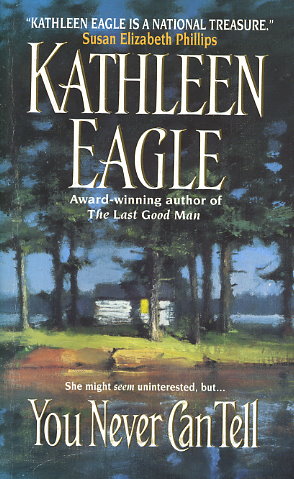 How can you find a man who doesn't want to be found?

"Where is he now?" That's the question on everyone's lips about strong, sexy Native American Kole Kills Crow. He was once a media darling -- men wanted to be him ... women wanted to be with him. But tragedy convinced Kole that it was time to vanish. Now, reporter Heather Reardon has turned up at his door, and although she's a tempting package, it's one he's hesitant to open -- at first.

Heather is feeling pretty proud of herself for finding her man -- even if she does have to track him down in some backwoods bar -- until she discovers that the hero of her fantasies wants nothing to do with his past. Nights spent together in his warm cabin reawaken the fire within him, and Heather ignites a shared passion that neither of them expected. But then Kole is thrust back into the harsh public spotlight, forcing him to face down the demons that still haunt him ... and making Heather wonder if she can trust her heart to a lover who will never be completely hers.
Reviews from Goodreads.com