You Are Destined to Be Together Forever — Dean Koontz 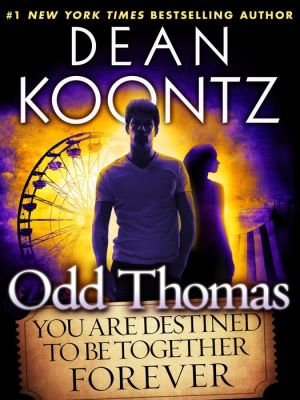 The singular journey of Odd Thomas is approaching its unforgettable conclusion in Saint Odd. But before Odd’s destiny is revealed, this exclusive eBook short story looks back—way back—to where it all began for Odd Thomas and Stormy Llewellyn, two souls who are destined to be together forever.

Amid the dizzying rides, tantalizing games of chance, and fanciful attractions of a state fair, two teenage sweethearts on the cusp of life and love’s pleasures find their way to a shadowy carnival tent brimming with curiosities. There, from the bizarre and enthralling Gypsy Mummy, a mechanized merchant of dreams and prognosticator of tomorrows, the young couple learns what fate promises for them. But fate, for Odd Thomas and Stormy Llewellyn, is something altogether different: full of dark corners, sharp edges, and things no seer or soothsayer could ever anticipate.

And for Odd Thomas, a gallant fry cook from a sleepy California desert town, the future beckons—to listen to unquiet spirits, pursue unsettling mysteries, and learn shocking truths . . . for a purpose far greater than himself.

Acclaim for Dean Koontz and his Odd Thomas novels

“This is Koontz working at his pinnacle, providing terrific entertainment that deals seriously with some of the deepest themes of human existence: the nature of evil, the grip of fate and the power of love.”—Publishers Weekly (starred review)

“One would be hard-pressed to find a more satisfying read. . . . Not since Watchers has Dean Koontz created such an endearing and enduring character as Odd Thomas. . . . A superb story from one of our contemporary masters.”—San Antonio Express-News

“An inventive . . . mix of suspense, whimsy and uplift.”—The Washington Post

“Heartfelt and provocative . . . a wonderfully rich and entertaining story.”—Chicago Sun-Times

“Suspense, tension, and surprising plot twists . . . Characters and the search for meaning, exquisitely crafted, are the soul of his work. . . . One of the master storytellers of this or any age.”—The Tampa Tribune
Reviews from Goodreads.com

You Are Destined To Be Together Forever is a prequel to the Odd Thomas series by American author, Dean Koontz. It introduces sixteen-year-old Odd Thomas, high school student and fry cook at Pico Mundo Grill, and Stormy Llewellyn, whom he is proud and pleased to call “his girl”. Mention is made of his best friend, P. Oswald Boone, his boss Terri Stambaugh, and his friend, Police Chief Wyatt Porter. And of Odd’s unique gift/curse: the ability to see dead people.

On his night off, Odd has borrowed Terri’s car and is taking his girl to the Carnival where Stormy is looking forward to snow cones with orange syrup. But Stormy will have to be patient, because an uninvited hitchhiker of the spiritual variety means they need to go save a life first. A short story with perhaps not quite as many twists as might be expected, but still likely to cultivate an interest in readers new to this seven book series. 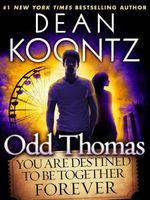