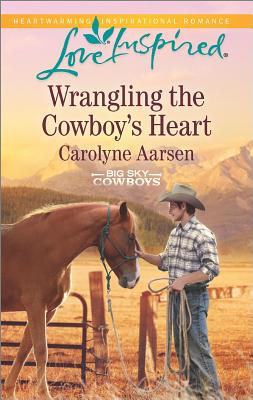 Love Under the Big Sky

Back home in Montana, free spirit Jodie McCauley plans to stay at her late father's ranch for just two months. Then she'll sell the Rocking M and head off on her next adventure. But first she'll have to take her beloved horses from wild to sellable. That means asking the boy she once loved for help. Finn Hicks is now a deputy sheriff and a horse trainer. Working so closely with Jodie, his feelings are suddenly resurfacing. But Finn remembers her as a wild child, not the family-oriented woman he's looking for. A second chance seems impossible, but is there still hope for the rugged cowboy and his first love?
Reviews from Goodreads.com

The Big Sky Cowboys series is a spin off of the author last Love Inspired Series, Refuge Ranch. The father was seen throughout that series in the cafe writing. It was noted he had three daughters who weren't interested in the ranch, leaving their ailing father alone.

This series, I'm sure, will concentrate on the three daughters. The first daughter, Jodie, was seen as a trouble maker when she was younger. But she carries scars from her life with her father - and secrets she is afraid will bust the image of her dear father wide-open. Before leaving town years ago, she managed to break the heart of Finn Hicks.

Finn is now a deputy sheriff and horse trainer. He mourns the loss of his dear friend, Jodie's father, and isn't sure about having Jodie back for a couple months. While there, the town could use her help. But some people just can't forget how "bad" she was.

My heart broke for Jodie and her trouble past, and for Finn having to lose the perfect image of a man he thought was so great. I hope the other two books reveal more of this troubled man - their father.

The romance was okay. It didn't sell me...I thought it took a backseat to the main story.