With This Ring — Carla Kelly 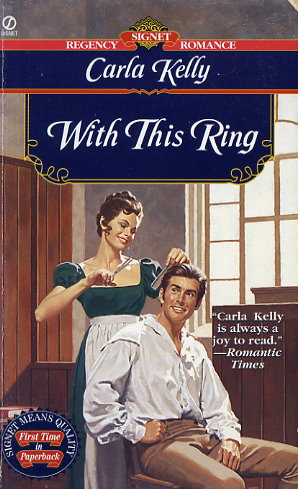 It was clear to Lydia Perkins from the first that she was courting scandal when she became involved with Major Samuel Reed. This outrageously impudent officer kept deplorable company in dismal surroundings beyond the boundaries of polite society. Even worse, he was shamelessly, sinfully penniless.

To keep him company would ruin Lydia's already slim chances in the marriage mart. To listen to the shocking proposal he made to her would spell ruin to her good name. To run away with him in a mockery of marriage on a honeymoon journey through the wilds of England was the ultimate folly for a young lady whose family demanded she wed both wisely and well. Could Lydia say "I do" and accept the Major for better or for worse, or would she risk losing the only man who had ever captured her heart?
Reviews from Goodreads.com