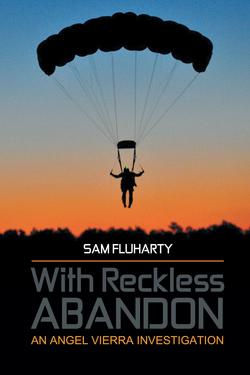 Share:
Angel Vierra is a homicide cop who never gives up on a case until the cuffs are on or the perp is dead. He tracked the Bible in Blood serial killer and arrested her after she shot him. He also solved the Winter Kill case that ended in a shootout with the psycho killer. When two elected county sheriffs are murdered, he is sent to the water-winter wonderland of northern Michigan. Vierra quickly discovers that his killer is Manny Modelo, the regional sales manager for the Sina Loa drug cartel. His partner Adrienne Kincaid is a War-on-Terror vet who ably assists in the investigation. However, Modelo has Kincaid in his sights and is set on eliminating her.

Jack Thorn, the Toronto Blue Jay's ace left handed pitcher, is the wild card. Thorn has his own reasons to eliminate Modelo and his own special ops talents. Thorn also has some powerful friends on his side, including a svelte and savvy NYPD detective.

The question becomes: who will find the killer first?

. . . Fluharty, a former Vietnam pilot, puts his flight experience to good use in this novel, and also showcases an authority on police techniques and procedure. he story is briskly paced, and the narrative remains central without disappearing behind extraneous information. An uneven romantic thriller that will appeal to genre fans (Kirkus Reviews of New York).

Sam Fluharty flew a gunship in Vietnam and earned the Distinguished Flying Cross for Valor and the Purple Heart. He earned a law degree, and life got boring. Angel Vierra is Harry Bosch, Lucas Davenport and Billy Gravesand of course, Sam Fluharty. Try to keep up with him!