Where There's a Will — Leanne Banks 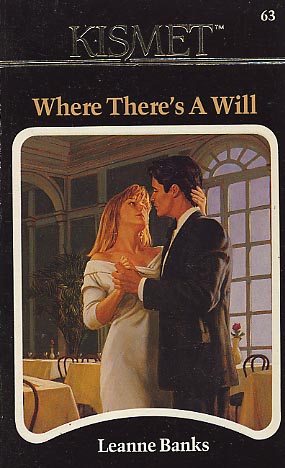 TOO CLOSE FOR COMFORT

When Jake Slater came face to face with his new business partner, he couldn't believe his eyes. With long blond hair and curves in all the right places, Chelsea Collins was not your average building contractor. She was the kind of woman who opened doors with a smile, the kind that made men drop what they were doing for a second glance. She was going to be hell to deal with.

But Chelsea had come to Arizona to claim her half of Collins and Slater, General Contractors, the business set up by her father and Jake. Eager to accept the challenge set forth in her father's will, she was ready to spend the next year working as a contractor. But the situation brought her much too close to her new partner, Jake Slater. She couldn't help but notice the way his powerful chest and broad shoulders strained against his T-shirt. And the way Jake's jeans fit could make any woman dizzy. Jake Slater was a prime example of the saying, "Play hard, work hard, love hard!' Chelsea would have to guard her heart against the latter.

From the start, Jake didn't want Chelsea anywhere near company operations. With her sunny disposition and striking beauty, she could easily lead him--and most of his workers--astray. Chelsea Collins was just the woman to eat away profits and break his heart, unless he discouraged her involvement at every turn.
Reviews from Goodreads.com