What Have You Done — Matthew Farrell 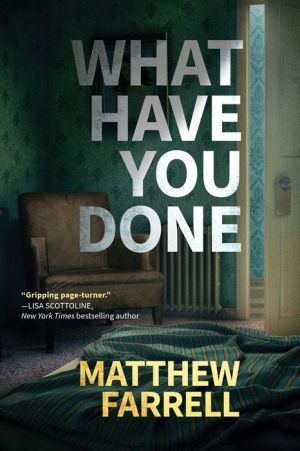 Share:
Family is not what it seems in this raw, edgy thriller that New York Times bestselling author Lisa Scottoline says “you won't be able to put down.”

When a mutilated body is found hanging in a seedy motel in Philadelphia, forensics specialist Liam Dwyer assumes the crime scene will be business as usual. Instead, the victim turns out to be a woman he'd had an affair with before breaking it off to save his marriage. But there's a bigger problem: Liam has no memory of where he was or what he did on the night of the murder.

Panicked, Liam turns to his brother, Sean, a homicide detective. Sean has his back, but incriminating evidence keeps piling up. From fingerprints to DNA, everything points to Liam, who must race against time and his department to uncover the truth -- even if that truth is his own guilt. Yet as he digs deeper, dark secrets come to light, and Liam begins to suspect the killer might actually be Sean…

When the smoke clears in this harrowing family drama, who will be left standing?