Two of a Kind — Susan Mallery 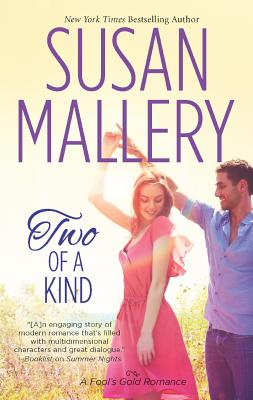 Felicia Swift never dreamed she'd hear a deep, sexy voice from her past in tiny Fool's Gold, California. The last time Gideon Boylan whispered in her ear was half a world away…on the morning after the hottest night of her life. Her freaky smarts have limited her close friendships, and romance, but she came to Fool's Gold looking for ordinary. Gorgeous, brooding Gideon is anything but that.

Black Ops taught Gideon that love could be deadly. Now he pretends to fit in while keeping everyone at arm's length. Felicia wants more than he can give -- a home, family, love -- but she has a lot to learn about men…and Gideon needs to be the man to teach her.

As these two misfits discover that passion isn't the only thing they have in common, they just might figure out that two of a kind should never be split apart.
Reviews from Goodreads.com

TWO OF A KIND is Felicia and Gideon's story. I won't rehash the blurb for you but will just say that the story is a true finding love romance. Felicia is a great character. Fans of smart characters who are quirky will adore Felicia, she just makes you smile. Gideon is a hero to die for, he's strong, silent and simply sexy. The story itself will leave you laughing, sighing, and at times a little teary-eyed. There are great characters, both main and secondary. The setting of Fool's Gold, CA is just outstanding. Fans of the series will have another winner on their hands. Those who are new to the series will have a great introduction that will leave them eager to read all the previous titles. While this is part of a large series, The Fool's Gold Series, you can read it alone or with just the previous title, Just One Kiss, which begins the Bodyguard Trilogy. However you don't have to read any title to follow TWO OF A KIND. I do highly recommend TWO OF A KIND. Fans of small town romances, romances with characters who seem completely different, fans of lovers who are reunited and basically any reader of romance. I'd suggest you pick up TWO OF KIND today, you won't regret it! I finished it in one night, so be prepared to not want to put it down!