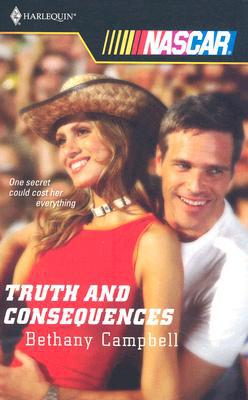 Penny Branch is stunned to learn that her father has disappeared--and with him, millions of dollars stolen from his bank, his customers and even his family! But even worse is the fact that Penny's soon-to-be ex-husband, bank executive Craig Lockhart, is the one who turned her father in....

Now the Branches face destitution. Penny's twin brothers--drivers in the NASCAR NEXTEL Cup Series--will lose their sponsorships, and their mother may be forced to declare bankruptcy. But how can she fault Craig for his betrayal? Especially when Penny has a secret of her own...and she would rather end her marriage to Craig than have him discover the truth!
Reviews from Goodreads.com

Truth And Consequences by Bethany Campbell
Harlequin NASCAR Library
Secrets And Legends Series Book 3
Sexy swimsuit model Penny Branch Lockhart has been keeping a secret for some years. Burying the past, instead of dealing with it, always manages to come back to haunt you. In her case it’s breaking up her marriage to a man she truly loves. She’s not sure if the truth will set her free of guilt or secure her divorce.

Banker Craig Lockhart fell in love with his future wife the moment he looked at her picture on his bosses desk. He don’t know what changed but suddenly she wants a divorce, he don’t. As if that isn’t enough trouble to deal with his boss, Penny’s dad, has disappeared and secrets have been revealed. And his own family needs his help again, as they have since his father died.

In this third book of the series more mysteries are added to the mix. Hilton Branch has taken the money and run and they’ve yet to find him. The blackmailer from the first book, In High Gear, has yet to be found. More characters have been added to the mix as well. In previous books the reader was introduced to NASCAR newbies, the Branch twins Will and Bart and their younger brother Sawyer. Their stories and the mysteries continue. The fourth book in the series is Fully Engaged.
http://justjudysjumbles.blogspot.com/2013/05/harlequin-nascar-library-collection.html