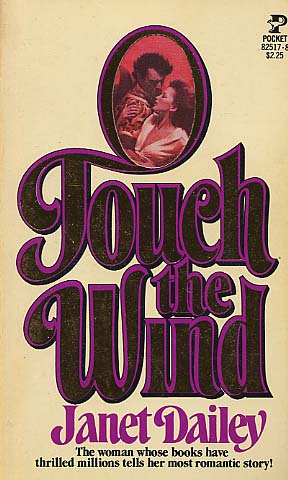 Share:
A great romantic storyteller carries you away - from the wealth and splendor of a modern Texas city, to the rugged majesty of Mexico's High Sierras!

All her life Sheila Rogers got what she wanted, then didn't want it anymore - including a reckless marriage doomed to perish in her husband's arrogant greed.

Then came the man they called Rafaga, The Wind, the violent, gallant bandido who carried her off in a blaze of gunfire to his mountain retreat.

He offered her raw passion. She answered with brazen resistance. But there among his followers she saw the gentleness that was also Rafaga, and learned why his name was a quiet promise in his people's hearts.

She yearned to become the woman who could live beside this powerful, tender man...to warm her body and soul with his proud, defiant strength...to reach out across their separate worlds and...TOUCH THE WIND