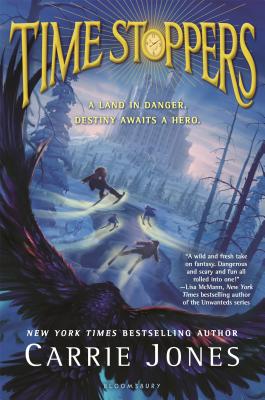 Discover the magical town of Aurora in this exhilarating first book in the Time Stoppers series--perfect for fans of Percy Jackson and The Five Kingdoms.

Annie Nobody thought she was, well, nobody, living in a nowhere town where nothing goes her way. Day 1 at her newest foster home proves to be dreadful, too ... and things get even worse when she's chased by something big and scary that definitely wants to eat her.

Luckily for Annie, not everything is what it seems, and she gets swept up--literally--by a sassy dwarf on a hovercraft snowmobile and taken to Aurora, a hidden, magical town on the coast of Maine. There, she finds a new best friend in Jamie Hephastion Alexander--who thought he was a normal kid (but just might be a troll)--and Annie discovers that she's not exactly who she thought she was, either. She's a Time Stopper, meant to protect the enchanted.

Together, Annie and Jamie discover a whole new world of magic, power, and an incredible cast of creatures and characters. But where there's great power, there are also those who want to misuse it, and Aurora is under siege. It's up to the kids to protect their new home, even if it means diving headfirst into magical danger.
Reviews from Goodreads.com