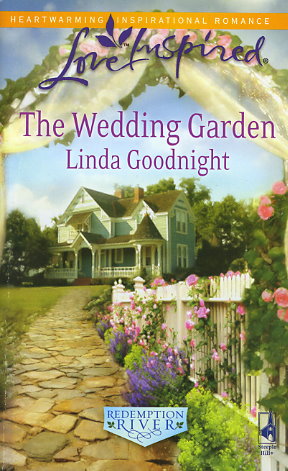 The young boy's question shocks Sloan Hawkins. Until Sloan realizes he is this child's father. Years ago, the former bad boy was run out of Redemption, Oklahoma, where, ironically, he was thought unredeemable. The only people who believed in him were his beloved aunt and Annie Markham, the girl he loved and left behind. Now Sloan is back to face his past and help keep his aunt's cherished garden thriving. But when he discovers his secret child -- and that single mother Annie never stopped loving him -- he's determined that a wedding will take place in the garden nurtured by faith and love.
Reviews from Goodreads.com

This book was SOOOOO GOOD!!!

It focuses on Annie Markham, who is newly divorced with two children and Sloan Hawkins, who is back to care for his dying aunt.

Sloan's story is sad. His father murdered a man over gambling debts when he was too young to remember,and his loving mother disappeared one night after she supposedly ran off with a trucker from the diner where she worked. She was friends first with Sloan, but as they grew they fell in love. Then the night of her prom, Sloan disappeared without a word to her. She was never even able to tell him that she was carrying their child! Instead, she married a man who promised to love and take care of her - but he didn't.

She has an eleven year old son who's very bitter by his father's rejection. Sloan takes him under his wing and soon learns why they are so drawn to each other. As they try to form some sort of relationship, other tragic events happen.

The twists and turns were so good! I suspected the truth about certain people and events early off, but never to the magnitude the author wrote them in! The last fifty pages or so really brought a lot of truths to light! I could hardly put this book down (though I had to)! After everything these two had been through, they are very deserving of each other! This book is as good, if not better than, the first book in this series!