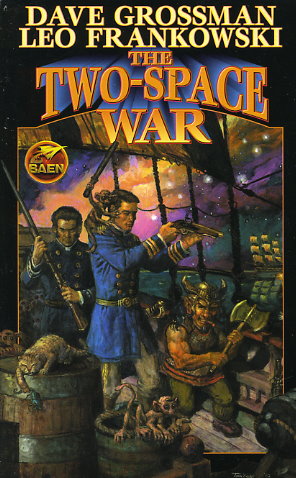 
WOODEN SHIPS SAIL TO THE STARS -- AND BEYOND!

It is six hundred years in the future and mankind has learned to move between the stars in Two-Space, the two dimensional realm where sentient wooden ships travel on canvas sails in a universe hostile to high-tech. With them are creatures out of human myth: The elven Sylvans who live in the vast forests of low-gravity worlds, the dwarven Dwarrowdelf who thrive deep in the mines of high-gravity worlds, and other far more alien races.

Against this stellar backdrop, Lt. Thomas Melville's ship is mortally wounded in a cowardly surprise attack. With his captain killed, Melville must capture a feral, sentient enemy ship, then fight his way across the galaxy to warn of the vast invading armada. In an odyssey of turmoil and battle he forges his ship and crew into a mighty weapon of war and earns the love of an alien princess.

Now, if he can survive the attacks of two very angry alien empires, and avoid being court martialed by his own nation for getting them involved in a vast intergalactic war, he might live to enjoy the fruits of his labor.