The Trouble with Words — Chris Crowcroft 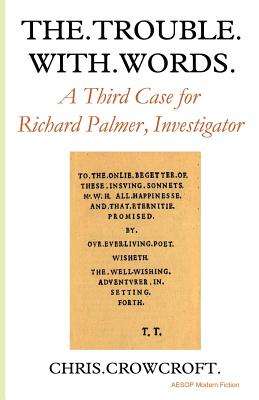 Share:
When Shakespeare’s intensely personal sonnets are published, only one thing is clear: none in the triangle of author, male muse or dark lady is best pleased – and each has a score to settle.
Richard Palmer is working as a censor, making sure that playhouse scripts do not offend political sensitivities. He works for the irascible, old-school Master of the Revels, Edmund Tilney and his designated successor, the altogether smoother Sir George Buc.
Buc has heard that William Shakespeare is working on a new play in collaboration with a novice writer. Who is George Wilkins, Buc wants to know? The landlord of Palmer’s local in Clerkenwell and a brothel-keeper with a taste for violence, which touches someone close to Palmer. So he too has a score to settle.
Plague closes the playhouses on and off for two years. What are the actors to do and what does it mean for the censors? In the murky world of Jacobean publishing,an unauthorised issue of private sonnets by the best-selling writer of the age is bound to make waves...