The Sorceress of Darshiva — David Eddings 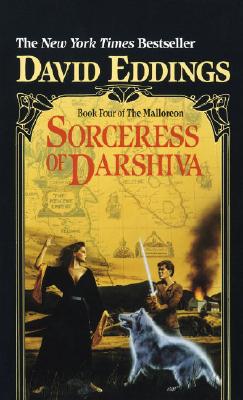 Troubles and delays continued to mount as Garion, Belgarath, Polgara, and the company pursued Zandramas across the known world. Possessed by the Dark Destiny, she had stolen Garion's infant son for a ritual that would destroy all that men valued.

She was always one step ahead, taunting and spying on them, flying over in the form of a great dragon. Her armies, led by a Demon Lord, threatened on one side; on the other were the forces of Emperor Zakath, seeking to capture them.

Somehow, as the Seeress of Kell had warned, they had to be at the Place Which Is No More for the ritual at the same time as Zandramas, or face disaster. But where that might be they still had no clue.

Here David Eddings continues his bestselling The Malloreon in this story of ancient, opposing Destinies battling for control of a world and for the fate of all Gods and men.