The Seer and the Sword — Victoria Hanley 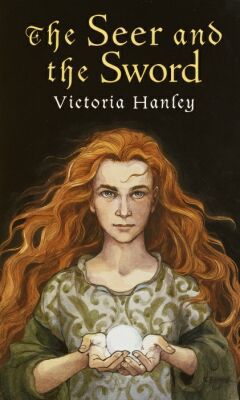 Share:
Legend states that there exists a mighty sword that makes its possessor invincible to his enemies. But there is a curse on anyone who lifts the sword for conquest. King Kareed of Archeld goes after this sword anyway, winning it from the King of Bellandra. When he returns home from battle, he brings his daughter, Princess Torina, two special gifts. One is a unique crystal, in which she can view visions of the future. The other gift is the defeated king’s son Landen, who is to be her slave. Torina immediately releases Landen, who becomes a member of the King’s army and her close friend.
But trouble is lurking in the kingdom of Archeld and people are accusing Landen of plotting against the King. Torina refuses to believe he would hurt her family. Then Torina begins seeing deadly visions in her crystal. Can she save her father’s life and the future of her kingdom?