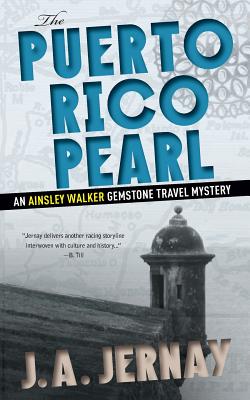 “Well-paced and skillfully told, with an outstanding sense of place, an enjoyable main character, and entertaining supporting cast.... [Ainsley Walker] swept me off my feet.” -- Venus de Hilo, 5-star review “A delightful [series] – it will enchant you with exotic places and interesting characters.” -- Linda Osborn, 5-star review For fans of Nora Roberts and Janet Evanovich…. It’s hurricane season. An airplane en route to the States has just been forced to land on the island of Puerto Rico—and onboard is AINSLEY WALKER. Stranded in torrential rain, she is guided by another passenger towards a rickety plantation house in the island’s tropical interior, where she meets an elderly woman who has lost a precious family heirloom. It's a pearl brooch that had once belonged to an actual pirate of the Caribbean—and the spinster needs Ainsley to find it ... fast. Soon she finds herself on another runaway adventure—one that propels Ainsley from wealthy art museums to abandoned sugar mills, from colonial-era cities to buried pirate chests on abandoned naval bases. Along the way, she discovers joy, pain, friendship, danger, the limits of her endurance—and the fact that things are never quite as they seem. From an author who worked on the foreign desk of The Washington Post … …who explored North and South America for nearly twelve months… …who was a finalist in a prestigious short story contest sponsored by the estate of F. Scott Fitzgerald… …comes a travel adventure that will change the way you see your life.
Reviews from Goodreads.com