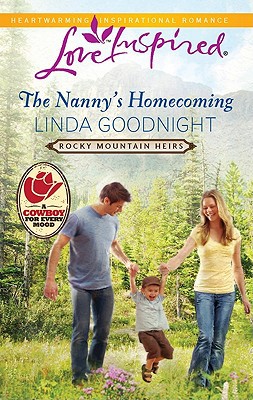 After her fiancé calls off their wedding, Brooke Clayton has nowhere to go but home.

If she can survive in the tiny Colorado town for a year, she'll fulfill the odd terms of her estranged grandfather's will. Turns out the wealthy businessman next door, handsome single father Gabe Wesson, needs a nanny for his sweet toddler -- and Brooke needs a job. But Gabe sees Brooke as a reminder of the young wife he lost. Given their pasts, do they dare hope to fit together as a family...forever?
Reviews from Goodreads.com

The Nanny's Homecoming by Linda Goodnight
Book 1 of Rocky Mountain Heirs
A feud is alive and well in Clayton, Colorado. Unlike the Hatfield's & McCoy's this feud is Clayton's VS Clayton's. Samuel Clayton's bunch believes that George Clayton took what belonged to them and now that George died, the feud is at new heights. If the six grandchildren of George don't come home to Clayton and live their for a full year, all the inheritance money and land will go to Samuel's family. Grandpa George knew that would entice the kids to consider the offer, along with gaining land and a quarter million dollars each. The kicker is that each of them must return to fulfill the will.

Brooke Clayton has just finished college, has no job, and recently her wedding plans went down the drain. So here she is in the family home. She needs a job and her handsome neighbor with the adorable son needs a nanny. Problem is that Brooke don't trust herself to be around kids. An old memory haunts her and she can't get past the guilt of it. It don't take long for the toddler, AJ, to creep into her heart and Brooke breaks through her fears to try and give the sweetie the love and attention of a woman.

Widower Gabe Wesson has just bought an old mine from George Clayton. He likes finding places that need a boost as long as there is still a chance to revive them. And he sees where that can happen in Clayton. When he meets his new neighbor, Brooke, he is attracted to her but she is young like his deceased wife was. Gabe can't get past the thoughts of all young woman acting like Tara did.

Someone is trying to scare Brooke out of Clayton and at the same time Gabe struggles with problems at the Lucky Lady Mine that shouldn't be happening. His company is known for safety and integrity. Can these two get past their past and present problems and find a life together? This is book one and it looks like it will be a great series.

To begin with, the first book of this multi-author series begins with a grandfather dying and leaving a strange will behind. His six grandchildren will have to live in Clayton for an entire year in order to receive an inheritance. each will receive half a million dollars and land if they succeed. This doesn't set well with most of the grandchildren.

The first book is about granddaughter, Brooke Clayton who just broke up with her fiance and presently doesn't have anyplace to live or work. She has a love for children but is afraid of them due to an accident that happened to her as a child in which a sister died. Her parents are both dead (her father's illness is mysterious and will probably be revealed in a later book - I hope). When she meets her next-door neighbor, she finds his request for her being his nanny for his three year old son almost impossible to resist!

This first book holds a lot of promise for the series. A mystery is involved around the "other side" of the Clayton family (apparently the grandfather and his brother had bad blood and the two families have freuded ever since). This book deals with several issues: accidental drowning, guilt, young marriage, poor marriage choices, death of a spouse, widowhood, motherless child, breaking and entering, kidnapping, and restrained love. There is so much action in this book that once you start, you won't want to stop until you reach the end!

I especially liked how the author dealt with Brooke's problem of fear of children and with the difference in her and Gabe's ages. She did very good making these two issues non-issues by the end of the book! The little boy was adorable, and there is a LOT of mysteries to be solved! Oh, and of course I loved the way Gabe came to Brooke's rescue at the end...