The Mystery of the Bamboo Bird — Carolyn Keene 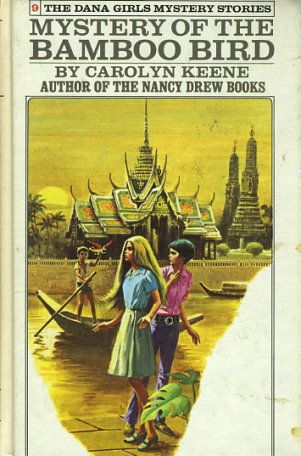 
When a bamboo Garuda bird containing a sacred gold statue is stolen from Malee Wongsuwan at Starhurst School, she begs her friends, Louise and Jean Dana, to help recover the treasured possessions.

Despite a warning of possible danger, the Danas agree to take the case. Their efforts to apprehend the thief take the three girls across the United States and on to Malee's native country, Thailand. In Bangkok, the city of magnificent temples and picturesque canals, a trail of puzzling clues and a series of harrowing experiences await the young detectives.

This thrilling story of Louise and Jean's adventures in the Far East makes fascinating reading.