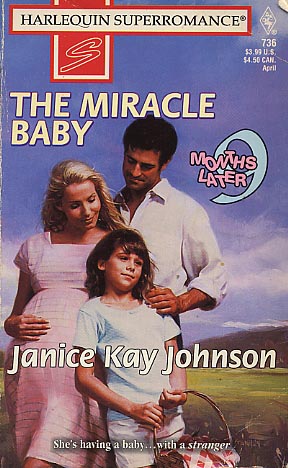 If having a baby with a stranger is what it'll take to save her daughter's life...Beth McCabe is willing to have one.

Nate McCabe hasn't seen or spoken to his identical twin brother, Rob, for fifteen years. Now Rob is dead and Nate learns that Rob's widow, Beth, and her young daughter, Mandy, need him--but only because he's Rob's twin. Only because they need a miracle.

Mandy will die without a bone-marrow transplant. When Nate's tissue fails to match, Beth persuades him to step into his brother's shoes and father a baby--Beth's baby--a child who has a one-in-four chance of saving Mandy's life.

Nate learns to love Mandy and her beautiful mother--to say nothing of his future child. But when Beth looks into Nate's eyes and tells him she loves him, who is she seeing? Nate? Or the mirror image of Rob?
Reviews from Goodreads.com