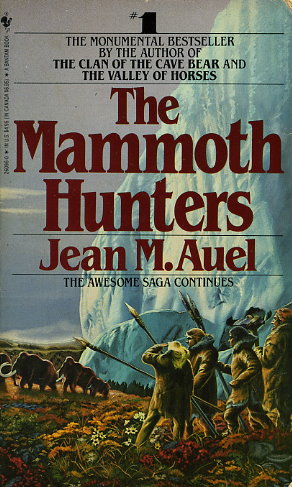 Once again Jean M. Auel opens the door of a time long past to reveal an age of wonder and danger at the dawn of the modern human race. With all the consummate storytelling artistry and vivid authenticity she brought to The Clan of the Cave Bear and its sequel, The Valley of Horses, Jean M. Auel continues the breathtaking epic journey of the woman called Ayla. Riding Whinney with Jondalar, the man she loves, and followed by the mare's colt, Ayla ventures into the land of the Mamutoi--the Mammoth Hunters. She has finally found the Others she has been seeking. Though Ayla must learn their different customs and language, she is adopted because of her remarkable hunting ability, singular healing skills, and uncanny fire-making technique. Bringing back the single pup of a lone wolf she has killed, Ayla shows the way she tames animals. She finds women friends and painful memories of the Clan she left behind, and meets Ranec, the dark-skinned, magnetic master carver of ivory, whom she cannot refuse--inciting Jondalar to a fierce jealousy that he tries to control by avoiding her. Unfamiliar with the ways of the Others, Ayla misunderstands, and thinking Jondalar no longer loves her, she turns more to Ranec. Throughout the icy winter the tension mounts, but warming weather will bring the great mammoth hunt and the mating rituals of the Summer Meeting, when Ayla must choose to remain with Ranec and the Mamutoi, or to follow Jondalar on a long journey into an unknown future.
Reviews from Goodreads.com

The action in "The Mammoth Hunters" continues the saga of earth's children and takes place in the Ice Age, 25,000 years ago.

Ayla is traveling with Jandlar, who is her lover. They meet the Mamutoi, who are like Ayla and are Mammoth Hunters. When the people in the village see that Ayla can control a horse by riding it and having it come when she whistles, some are impressed and some suspicious.

There is also conflict as Ayla develops feelings for Ranec, a carver of Ivory. Jandalar doesn't know how to deal with this and shows his jealousy.

One of the points that the author makes is to accept others who may be different. Ayla helps a six-year-old boy who is half Clan and half Other. He is a Flathead and cannot talk. Ayla knows sign language and teaches it to him. When he makes his first sign "Mother" his mother, Nezzi is delighted and tells Ayla that she never thought she'd be able to communicate with her son.

This ficticious examination of history shows how things may have been and shows readers that people who are from different races or Clans can get along. With today's political climate, this is a timely novel.

Ayla is a heroic figure who is a born leader at a time when women weren't regarded highly. She also shows a great ability to communicate and great wisdom.