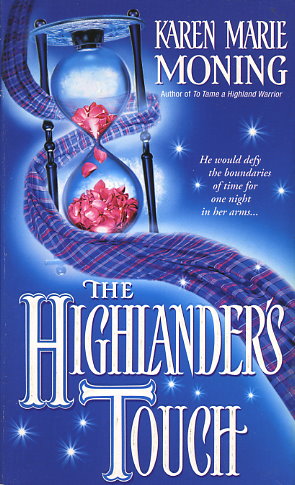 A WARRIOR OF IMMORTAL POWERS

He was a mighty Scottish warrior who lived in a world bound by ancient laws and timeless magic. But no immortal powers could prepare the laird of Castle Brodie for the lovely accursed lass who stood before him. A terrible trick of fate had sent her 700 years back in time and into his private chamber to tempt him with her beauty--and seduce him with a desire he could never fulfill. For this woman he burned to possess was also the woman he had foresworn to destroy.

A WOMAN CAUGHT IN THE MISTS OF TIME

When Lisa felt the earth move under her feet, the fiercely independent 21st-century woman never dreamed she was falling...into another century. But the powerful, naked warrior who stood glaring down at her was only too real...and too dangerously arousing. Irresistibly handsome he might be, but Lisa had no intention of remaining in this savage land torn by treachery and war. How could she know that her seductive captor had other plans for her...plans that would save her from a tragic fate? Or that this man who had long ago forsaken love would defy time itself to claim her for his own....
Reviews from Goodreads.com

AUTHOR: Third time reading a book by Karen Moning. She has definitely disappointed me. She continues to be on my TOP FIVE list of favorite Romance Authors. Her books are adventurous and passionate.

SYNOPSIS
Adam Black has made Circenn immortal and he is several hundred years old. Something he is definitely happy about.. Lisa arrives and the first thing she sees is naked Circenn standing right before her eyes. He later barges into the room and sees her changing into her clothes. He has never seen a set of bikini panties and push up bra. The young lad Eirren shows up at unlikely times to help Lisa and all she wants to do with him is give him a bath. Lisa has been frantically looking for a flask since she arrived at the Castle. Circenn goes out to meet with Robert the Bruce as he and his knights approach the castle. Robert the Bruce makes and unexpected announcement to Circenn's clan. Unfortunately it puts Circenn and Lisa in a bad position. Just before Circenn leaving for battle, Lisa finds him in a chamber she has never seen before. Lisa wishes something from the Fairy Queen that she did not really want. Circenn finds out who his father is and makes a trip to the future.

SEX SCALE: Of the following five options: 1) NOT very descriptive and requires imagination' 2) WILL make you wiggle a little) 3) WISH it was me; 4) OH boy, do not have to use my imagination at all; 5) EROTICA and well over the top
******THIS BOOK GETS A FOUR for "OH BOY I WISH IT WAS ME". I think he is sexy.

FAVORITE PART: Love the reactions when Robert the Bruce makes an announcement to the Brodie clan.

LEAST FAVORITE PART: Believe it or not, I liked the entire book

YOU WILL LIKE THIS BOOK IF YOU LIKE: Time Travel. A mischievous fairy popping in to cause havoc with a purpose in mind. Castle life. A love so strong that each mind can be read by the other. 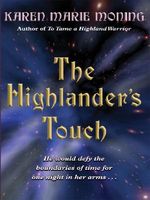