The Headstone and the Hammerstone King — Matthew Farrer 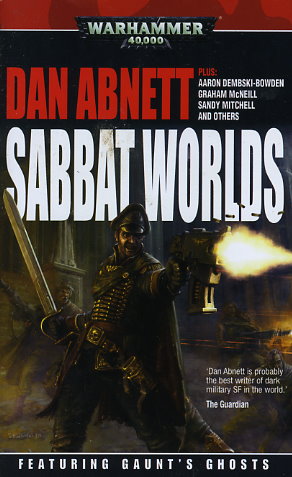 Share:
A collection of tales set in the war-torn Sabbat Worlds

ACROSS THE SABBAT Worlds, a bitter conflict is being fought, a conflict that can only end in victory or annihilation. The innumerable forces of the Archenemy attack without ..mercy, and planet after planet burns with the flames of war. Yet even amidst this nightmare, the Imperial Guard stand stoic against their foes. The Phantine Air Corps . battle the enemies of mankind across burning skies, while the Gereon resistance tries to break the foothold of Chaos on their beleaguered world and the legendary Giunt's Ghosts fight in the most violent and bloody of warzones.

This anthology opens the gateway to the Sabbat Worlds, featuring new stories from some of the Black Library's best-known authors including Dan Abnett, Graham McNeill, Aaron Dembski-Bowden and many more.