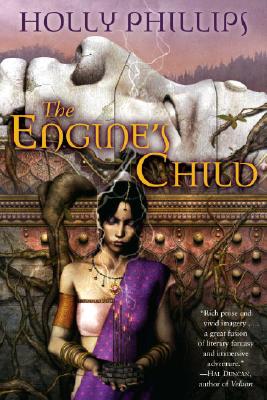 
From acclaimed author Holly Phillips comes a major work of visionary fantasy in the vein of Jeff Vandermeer and China Mieville. As richly detailed as it is evocative, the vivid prose of this ambitious novel illuminates a lushly imagined world poised on the brink of revolution.

Lanterns and flickering bulbs light the shadowy world of the rasnan, the island at the edge of a world-spanning ocean that harbors, in its ivory towers and mossy temples, the descendants of men and women who long ago fled a world ruined by magical and technological excess. But not all the island's inhabitants are resigned to exile. A mysterious brotherhood seeks to pry open doors that lead back to their damaged, dangerous homeland. Others risk the even greater danger of flight, seeking new lands and new freedoms in the vast, uncharted sea.

Amid a web of conspiracy and betrayal, three people threaten to shatter this fragile world. Scheming Lord Ghar, faithful to lost gods and forbidden lore, plays an intricate power game; Lady Vashmarna, an iron-willed ruler, conceals a guilty secret behind her noble façade; and Moth, a poor, irreverent novice, holds perhaps the darkest power of all: a mysterious link to a shadowy force that may prove to be humanity's final hope -- or its ultimate doom.