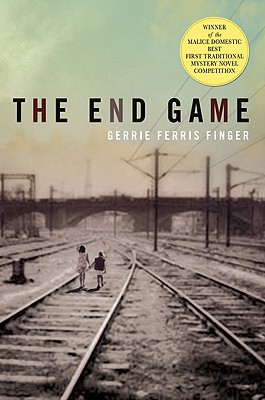 An ex-cop, Dru established Child Trace, Inc., after leaving the force. Judge Devon sees to it that Lake is assigned to head the police investigation, because Dru and Lake together have a habit of solving cases.

After questioning the neighbors, the couple decide that the abduction of the girls looks like more than an ordinary kidnapping. Dru learns that in the past eight years two other foster children from the area have gone missing. The investigation turns up a snitch who tells Dru he's heard that a secret sex organization, with members named after chess pieces, is bound for Costa Rica with two girls. The chase is on to stop the kidnappers before they escape the country. The latest winner of the Malice Domestic Best First Traditional Mystery Novel Competition, The End Game features a strong new heroine in a vivid Southern setting. Gerrie Ferris Finger puts a new spin on the classic mystery novel.