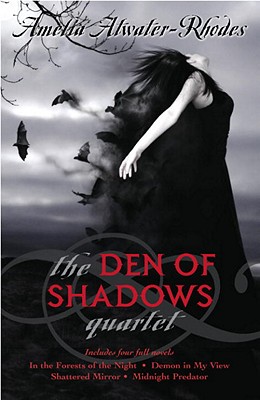 FOUR COMPLETE NOVELS—ONE CAPTIVATING WORLD
In the Forests of the Night
Three hundred years ago Risika had a family—a brother and a father who loved her. Three hundred years ago she was human. Now she is a vampire, a powerful one. And her past has come back to torment her.
Demon in My View
Jessica isn’t your average high school student—she’s an acclaimed published author of vampire fiction. Now two new students at her high school strongly remind her of her favorite characters. But those characters only live in her imagination—right?
Shattered Mirror
Christopher Raneva and Sarah Vida may look like a normal high school couple, but he’s actually a vampire who’s sworn off human blood and she’s an incredibly powerful, vampire-hunting witch. As if that weren’t enough to prevent their love, his past and her future collide when they get tangled up with Nikolas, one of the most reviled vampires ever.
Midnight Predator
Once a happy teenager, Turquoise Draka is now a vampire hunter. Her current assigment is to assassinate Jeshikah, one of the cruelest vampires in history. But to do that, she’ll have to enter Midnight, a fabled vampire realm, as a human slave. . . .
Reviews from Goodreads.com