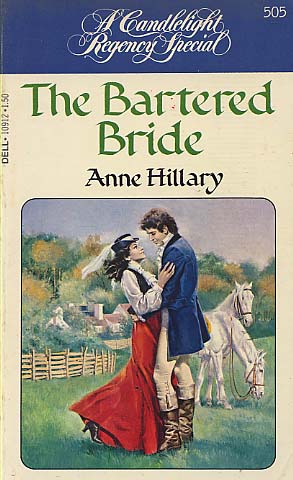 
Robin and Kitty are both pawns in a game played long ago by their fathers--a gambling aristocrat who finally lost more than he could afford, and a wealthy social-climbing commoner who offered the other an ideal way to discharge his losses. Now that the Earl of Scotney was dead, his son Robin was bound to honor his father's last debt--an iron-clad contract compelling Robin to marry a woman he had never seen. A woman he didn't know and didn't want. And what of the woman herself? Ravishing raven-haired Kitty Tolbert swore never to marry a man willing to barter his title for her fortune. Never.

But then Kitty met a handsome stranger and fell in love. She didn't know his name and didn't care--until the day Lord Scotney came to claim his bride and her dowry. It was Robin! The man she loved at first sight and the man she had halved for years were one and the same! Could she ever look into his eyes again without wondering about this man who could deny his heart to settle a debt and marry a fortune? Kitty knew the future was in her hands. She couldn't live with him--but could she live without him?