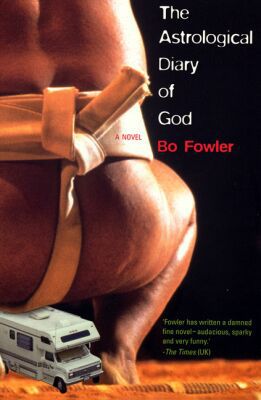 A masterpiece of religious parody in the tradition of Kurt Vonnegut.

Japs Eye Fontanelle, an 88-year-old overweight, retired Japanese kamikaze pilot, insists that he is the rightful king of the Holy Channel Island of Jersey. He also claims to be the Creator of the Universe. This is his autobiography, written while under armed guard inside the gold vault at Fort Knox. Fontanelle recounts his truly remarkable life: from his birth in the city of Kyoto and his involvement in World War II, to his study of the ancient science of astrology, the historic discovery of his own divinity, and the founding of the first Astrological Kingdom on Earth. Occasionally, when he isn't busy creating galaxies, he takes a break to watch "Star Trek".

Structured in twelve meticulously-researched, hilariously funny zodiacal chapters-and padded with photo inserts revealing such delights as God returning from his ninth suicide mission, Shinto monks, and God's genitals- The Astrological Diary of God is a savage and irreverent take on modern belief.