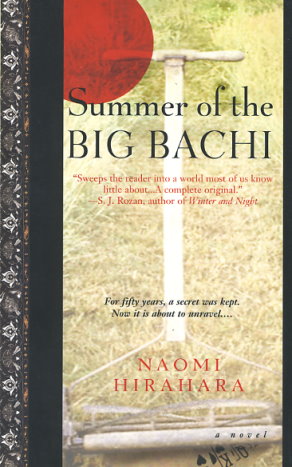 In the foothills of Pasadena, Mas Arai is just another Japanese American gardener, his lawn mower blades clean and sharp, his truck carefully tuned. But while Mas keeps lawns neatly trimmed, his own life has gone to seed. His wife is dead. And his livelihood is falling into the hands of the men he once hired by the day. For Mas, a life of sin is catching up to him. And now bachi -- the spirit of retribution -- is knocking on his door.

It begins when a stranger comes around, asking questions about a nurseryman who once lived in Hiroshima, a man known as Joji Haneda. By the end of the summer, Joji will be dead and Mas's own life will be in danger. For while Mas was building a life on the edge of the American dream, he has kept powerful secrets: about three friends long ago, about two lives entwined, and about what really happened when the bomb fell on Hiroshima in August 1945....

A spellbinding mystery played out from war-torn Japan to the rich tidewaters of L.A.'s multicultural landscape, this stunning debut novel weaves a powerful tale of family, loyalty, and the price of both survival and forgiveness.