Shadows of the Hersweald — Hope Ann 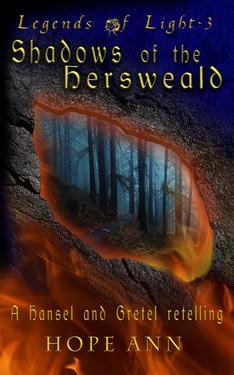 Share:
Any victor should know better than to issue a pardon for those he’d defeated.

Especially when the defeated include power-hungry rebels. Rebels Haydn spent the last two years fighting alongside before abandoning them on the seeming cusp of victory.

Back in his small village, fending off attacks from stray rebels while awaiting the Prince’s judgment, Haydn is none too pleased. He’s been counting on the rebels’ capture to keep his mother and sister safe.

Haydn knows better than anyone that his actions deserve no mercy.

His former comrades lurking the surrounding mountains deserve even less.

Caught between the guilt of his past and duty to those he loves, Haydn’s bitterest fight begins just as the war ends. It’s a fight he intends to win.

Even if it means rejecting the pardon that could save his life.

Perfect for those who love fantasy but don’t have the time to sit down for a full-length novel, the third novella in the Legends of Light series presents the story of Hansel and Gretel in a clean, exciting, and inspiring manner. Full of danger, loyalty, and betrayal, all tinted red from the shuddering glow of the firecarn, this is more than a mere retelling of a favorite fairy tale.

A stand-alone story, Shadows of the Hersweald focuses on the third fruit of the Spirit, peace, while following the aftermath of the war between the Prince and Tauscher.